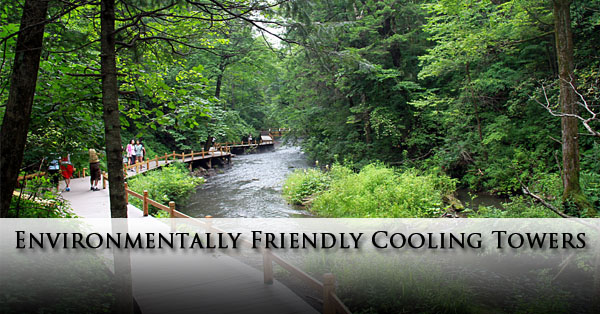 Many of our modern industrial processes in Arizona produce extreme levels of heat. Having environmentally friendly cooling towers in Phoenix keeps these processes and buildings cool without undue impact on the environment. Cooling Towers being an integral part of a city landscape need to be aesthetically tolerable. This is something that community members, owners, and operators are seeking.

A few of the other factors that lend to cooling towers being able to do their job without being an eyesore are controlling the plume rising from the towers, keeping the cooling towers quiet as possible, and treating the water inside the towers.

With so many rightly concerned about being environmentally in Phoenix conscious seeing a large plume of steam coming from a cooling tower can raise some concerns. As much as the plume is just evaporated water manufacturers have responded by fitting the cooling towers with plume abatement measures. Community members might think it’s just unsightly or some might even worry that it reduces visibility.

In some application areas in Arizona, the cooling towers must operate in or near residential or commercial shopping areas. In many industrial applications distance and design are enough to negate the noise produced by the cooling tower. However in these areas where retail and commercial businesses are trying to operate excess noise can be a big problem. In these cooling tower applications additional noise attenuation measures are a great solution.

One of the times that cooling tower noise control is most critical is at night. If the cooling towers are loud and make sleeping difficult it can raise concerns. One solution to this noise problem is to have a two-speed motor. During quiet hours it can run at a lower speed and cycles can be eliminated overnight to make the cooling tower quieter. Another solution is variable speed drives that will avoid the noise of the system from cycling on and off. A benefit of a variable speed unit is that it will also run your cooling tower more efficiently and will pay for itself in energy savings.

With environmental regulations becoming ever more stringent in Phoenix owners and operators need to monitor the quality of water that is being circulated or discharged by the cooling tower. Cooling tower water treatment is a way that owners can control this factor, and follow the guidelines set forth by the environmental protection agencies.  Cooling towers coincidentally end up cleaning the air that is processed through the fill material for the purpose of dissipating heat. As a result the particulates and pollution that is already in the air in the area the cooling tower operates in are cleaned out of the air and end up in the water circulating through the cooling tower. With progressively more restrictive limits on the use of chemicals for blowdown makeup water owners are challenged continuously.

With the limits put on the levels of chorine used to control the biological growth plants have had to come up with alternative methods. One method operators have turned to, to comply with Arizona EPA regulations is ozonation to maintain water quality and still have cooling towers that run efficiently. Different states and cities have different restrictions that must be followed or considered when thinking of alternate methods for water treatment. Contact your local Phoenix cooling tower experts for guidance on what options you have at your disposal.